What Is Nitro Cold Brew Coffee and How to Make it? 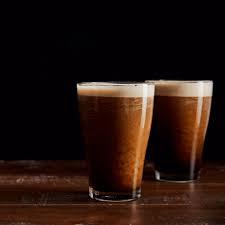 What Is Nitro Cold Brew Coffee and How to Make it?

Although it has been around for about a decade, Nitro Cold Brew Coffee is becoming a trendsetter in the industry. It is very different to the standard cup of coffee you enjoy in the morning or at your favourite coffee shop. To find out what really makes this a special cup of coffee, let us give you the full rundown on what it is and what to expect when you taste it for the first time.

Nitro Brew Coffee is a cold brew coffee that has been infused by nitrogen. Nitrogen is a gas and we already consume many beverages that have gas infused in them. The most obvious choice is soda pop. The gas used in these drinks is carbon dioxide. This means that your favourite soft drink is carbonated. The difference between these drinks and Nitro Cold Brewed Coffee is that nitro coffee is nitrogenated. There is a whole industry dedicated to the nitrogenation of beer. The difference between a nitro beer and nitro coffee is that the beer is infused with 70-percent nitrogen and 30-percent carbon dioxide. The infusion of gas in any beverage creates a different taste and feel of the product. This is what has contributed to the trendsetting of these drinks.

The History of Nitro Coffee

Kyoto, Japan has the claim to fame as the place where cold brew coffees originated. It started with just water and ground coffee and was followed by many in that city who established cold brew businesses where you can order cold coffee that has either milk or chocolate added to it. The infusion of nitrogen into cold brewed coffee did not begin until 2011 in New York City. The Queens Kickshaw ran cold coffee through a draft system that pumped pressurized nitrogen into the liquid as it passed through the piping system.

However, the precise origin of nitro cold brew coffee has been challenged by a company called Cuvee Coffee. They claim that the concept of nitrogenated coffee was theirs and that they had the idea back in 2005. But they never actually created it at the time. In fact, the closest Cuvee Coffee got was iced coffee that they started producing in 2012. At that time the company owner, Mike McKim tested the idea by infusing carbon dioxide into the cold brew coffee. It resulted in a major failure until McKim switched to nitrogen. That gas gave the cold brew a different texture and taste which was marketed under the name of Black & Blue. It was a nitro cold brew coffee that was sold in a can.

The Taste of Nitro Coffee

As stated, the infusion of nitrogen into cold brew coffee makes is a very different drink, but what exactly does that mean? Since the only option we have here is to describe the taste, we’ll do the best we can to capture what nitro coffee tastes like. The first thing you will notice is that it has a very distinctive creamy texture. Due to the silky nature of the texture, nitro coffee glides over your tongue and feels gentle in doing so. You could easily compare the feeling to that of draft beer, if that gives you a bit of assistance in the texture and feel of the beverage.

As for the taste of nitro coffee, it is sweet and is followed by a sharp and strong punch. It’s almost as if your taste buds are getting teased at first then receive the jolt of caffeine as an after note. As you swallow a mouthful, the nitrogen inside the coffee creates a frothy, bubbly texture that goes down easy. It almost feels as if you were drinking a cup of cold coffee with cream and sugar that had some gas injected into it. However, it is far more a taste sensation than that and one that has to be experienced to fully enjoy and understand the difference nitrogen makes.

How To Make Nitro Coffee

The key to properly creating a nitro brew coffee is the draft system. In this case, it is called a kegerator. What it does is provide you with the infusion valve and kegs for storage of your finished product and a dispenser for enjoying the coffee. What really sets the finished product apart from all others is the coffee that is used at the start of the process. In other words, good quality coffee will result in good quality nitro cold brew coffee. Using a sub-standard brew is going to show at the end of the process as it will impact the taste of the finished coffee.

The idea behind infusing cold brew coffee is to start with cold brew coffee. You can chill hot brewed coffee but it will lose some of the components that make coffee such a great drink. When you cold brew coffee, the aroma, oils from the coffee beans and taste are not compromised. The low temperature brewing extracts coffee in a way that prevents the oxidation. The delicate taste of cold brew also fits better with the nitrogenation. You then pass the cold brewed coffee through the draft system where it is infused with nitrogen. That is basically all you need to do in order to make your own nitro coffee. The nitrogen, by the way, will come in a tank and you can get them at hardware stores or small engine repair shops.

Ways To Create Your Own Special Nitro Coffee

There is nothing that says you have to just infuse nitrogen into your cold brew coffee. You can experiment with mixtures of nitrogen and carbon dioxide to see what results. A 30/70 mixture of CO2 to Nitrogen is common. Also, if you are aiming for a slightly sweeter tasting cold nitro coffee, add sugar or sweetener prior to feeding it through the draft system.

Generally speaking, since all you are doing is adding gas to coffee, the health benefits of nitro coffee are going to be the same as regular coffee. The only difference is if you use black cold brew coffee through the draft system. The finished product will be sweeter and silkier and taste as if sugar and milk were added. This means drinking black nitro coffee would be healthier than a regular cup of coffee with sugar and cream added.